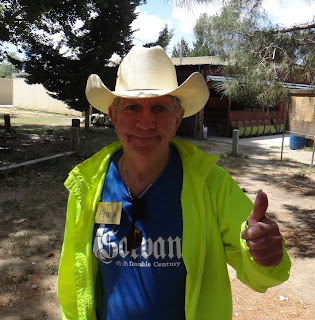 Frank working the Lunch Stop in Ventucopa on the Heartbreak Double Century in May, 2015

This is a place where people who loved Frank Neal may feel free to write a memory they have of him, a story, or to say goodbye to a good friend.  Please share your thoughts by clicking on the "Comments" at the bottom of the tribute below. You need not be a cyclist to share a memory here.  Please e-mail any photos of Frank that you'd like to share to Chuck Bramwell at cbrams@caltriplecrown.com and he'll post them here.

It was Frank's desire to not have a service of any kind.  But that doesn't mean we can't remember him here and pay tribute to a great man who gave back so much to cycling in California.  Please share your memories here. 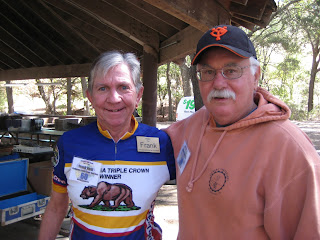 Frank and Mike Curren at the California Triple Crown Awards Breakfast in 2012. 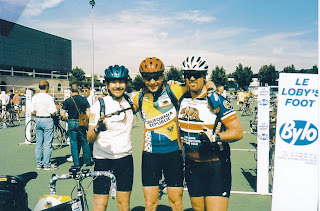 In 1999, Frank completed the 750 Mile Paris-Brest-Paris
Frank, Chuck Bramwell, and Doug Patterson are getting registered for the event here. 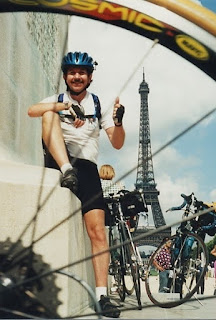 As shown HERE, Frank was an amazing cyclist and completed 60 Double Centuries from 1995 to 2006!!  In 2007, he started to really give back to our long distance cycling sport by helping support the Double Centuries in California.  From 2003 to 2016, he supported an incredible 87 Double Centuries!! 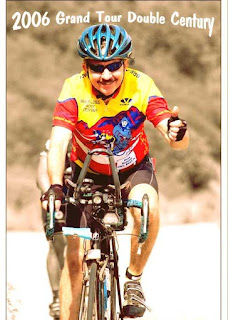 Prior to 1992, this next person was a serious tennis player.  Then, he tore a rotator cuff which ended that … he was gaining weight and needed another outlet.  He then discovered cycling.

He started seriously riding seriously in 1992 when his friends talked him into a 3-day bike tour.  He immediately got hooked on cycle touring.  His first Century was in November 1992 with a Century in Death Valley while he was on a tour.  He had never ridden on such terrible roads causing him to swear that he would never ride in Death Valley again.  Of course, 12 years later, he has now completed 8 Death Valley Double Centuries!!

This man’s first Double Century was the 1995 Tour of the Canyons.  It was a long, hot day.  He learned a lesson that would carry him through the Death Valley "Hurricane" Double the following year and has been his Motto ever since:  "Every ride is a new adventure.  Just keep the pedals turning!"

His best long distance ride was the 1999 Paris-Brest-Paris that he rode with his friend, Doug Patterson.  He received such great support from spectators during the entire ride and met so many great people.  The feeling of accomplishment crossing the Finish Line after 773 miles was indescribable!

This extremely persistent rider has finished every Double Century that he’s started!!  He has finished 52 Doubles without a DNF.  Even after being crunched by a careless motorist in Nov. 2000 and spending 10 days in the hospital, this cyclist just keeps going!

He’s never really had a worst experience but recalls the 1996 Death Valley “Hurricane” Double as being truly terrible.  He didn't much like riding in the blowing sand.  But, it taught him to not fear the wind.  In the 60 miles of 40+ mph headwinds, he yelled to the wind: “Is that ALL you've GOT!  You've got nothing!  You've got NOTHING!"  There was a high DNF rate that day, but he finished.

This person keeps meticulous records and found that since he started riding in 1992, his average ride length for ALL rides which includes short training rides with nubees and Mountain Bike rides is an astonishing 69.3 miles.

His 3 Strongest riding attributes are:
1  He always keep the pedals turning.
2  He’s patient and can carry anyone through a ride.
3  He loves to ride!
His ideas on nutrition are that everybody is different.  Eat what works for you.  He has to take a ton of calcium and some extra potassium to prevent cramping.  He starts by drinking a Boost or Ensure before each ride.  Most Important is that at the last Checkpoint, he seeks out a Coke or a Mountain Dew to power him to the finish!

He does have a requirement on the Monday after a Double: an In-N-Out Burger!!!

While riding during Double Season, he has only have one "training" rule: If I start to sweat, I'm working too hard and I need to gear down and slow down.  Riding is to enjoy.  It just never seems like work for me.

While riding, this person is usually either talking to someone, or looking around enjoying the scenery.  Riding clears his mind and clarifies his thinking.  He comes up with solutions to personal issues while on the bike so finds his bike his "low paid" therapist!

This 53 year old Buyer Manager in the Retail Grocery Industry holds a Bachelor of Science Degree in Zoology from Cal Poly Pomona.  His personal philosophy is:  Every Ride is a new adventure.  Embrace the diversity.  Prepare for the worst and enjoy the Best!  Just keep the pedals turning.

Always remember, you can lose all of this in less than the blink of an eye!  Each day; love your Family and enjoy the sport!

At the end of the ABC Coverage of the 1989 Tour de France, Greg Le Mond lifts his 5 year old son up to the Winner's Block as the announcer says:

Comebacks are always a part of the fascination with sports
From so far down, to so high up
How does it happen?

Like so many things, it begins with the most simple belief
The one you must have in yourself
That must be translated into results by dedication
The knowledge that dedication which feeds on belief can make it so

This person has had to overcome a whole lot more than most any of us can imagine.   Disaster struck while he was on a ride on Thanksgiving morning in 2000 when a careless motorist nearly ended his life.  He ended up with broken vertebra, broken ribs, collapsed lung requiring three chest tubes, bruised heart, bruised spleen, paralyzed intestines, concussion, sprained neck, lost front teeth, bruises on most of his body, and a broken finger.  He made an amazing comeback from that tragedy.

About a year later in December 2001, he crashed and dislocated his hip making 2002 a most difficult year.

His real Comeback was in 2003 with 10 Doubles, including Devil Mountain Double, the Grand Tour Highland Triple and he was recognized as the Orange County Wheelmen  Member of the Year.  This was amazing … this person basically came back to life in a very, very big way.

He writes with new meaning: “Finishing Doubles is a gift; I'm just glad to be riding, again! :-)”

He’s had some great and wild experiences in cycling.  On the Eastern Sierra in 1999, He forgot his bike shoes, but instead of giving up, he rode and finished the 200 Miles in floppy tennis shoes on platform pedals thanks to Lee Mitchell’s endless inventory of spare parts in the back of his van!!

Frank wrote: "Eastern Sierra, 1999.  In Bishop, I got up on the morning of the Ride to find that I had not packed my bike shoes.  I didn't know what to do, so I started the ride with SPD pedals and tennis shoes.  I would figure something out once I got on the road.  My tennis shoes kept slipping off the pedals.  I considered taping my shoes to the pedals.  ESD doesn't require too many stops.  But, I rejected that idea.  At ESD, the Start is a 25-mile loop out of Bishop and back, then it heads toward the first climb up Sherwin Grade.  Passing by Bishop, I had to make a decision.  My toes were already cramping.  I was, by far, the last rider .  I decided to stop and wait for a SAG.  Lee Mitchell showed up.  I said, "Lee, you need to give me a ride."  He looked at me in astonishment and said, "You!  You never quit!".  I replied, "Lee look at my feet."  He said, "Oh, you do have a problem."  He got out of his van and began to pace while stroking his beard.  Finally, he looked at me and said, "You know, I think I have an old pair of platform pedals in the back of the van.  Do you want to give them a try?"  I lit up, "Oh, yeah!"  Lee installed the platform pedals and I finished ESD in my tennis shoes and platform pedals.  And, I didn't finish last.  PS.  My feet hurt for two weeks afterward!"

On Paris-Brest-Paris in 1999, he rode three days with little sleep.  On the third morning, he spent 40 minutes riding and recording in his microcassette recorder without any recollection to this day.  The tape includes his remark: “It must have rained before we got here, because the peasants have their wet work gloves on."  But Doug later said this was in the dark and there were no peasants around anywhere.  He believes he spent 40 minutes "sleep riding and sleep recording"!   He surely knows how keep the pedals turning even when he’s asleep!!

It was an incredible honor for Chuck Bramwell to induct Frank Neil, the California Triple Crown Comeback Guy, into the Hall of Fame in 2004.

Frank was on the support team for Team Skipper, a 8 Tandem Team in the 2011 Race Across America as shown HERE. 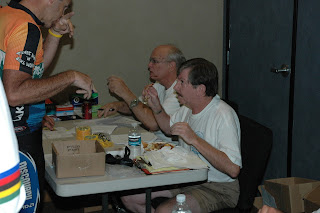 Frank helped with the finish line at the Grand Tour for many years.  Here he is shown checking riders in at the finish of the 2008 Grand Tour.  This job is a long and difficult one because riders arrive from 4pm to 4am the following day!! 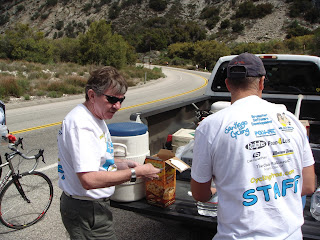 Frank was so helpful on the Breathless Agony Bike Ride ... helping to fix bikes and to lead a critical Water Stop every year!! 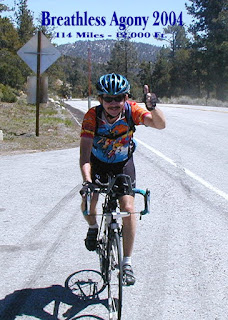 Frank completed the brutally hard Breathless Agony course in 2004!!
Frank rides a 1991 Bridgestone RBT touring bike.  He bought it at a markdown sale in 1992 from Mike Perone's bike shop.  Mike is now a California Triple Crown Winner himself and had no idea what he was starting when he sold Frank that heavy Bridgestone bike with a kickstand!! 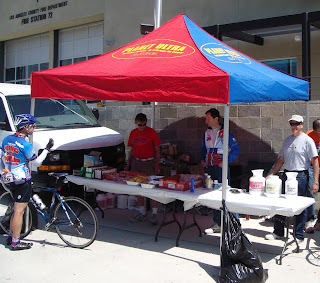 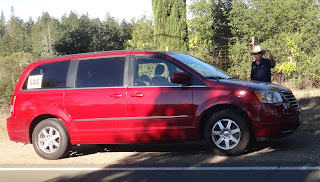 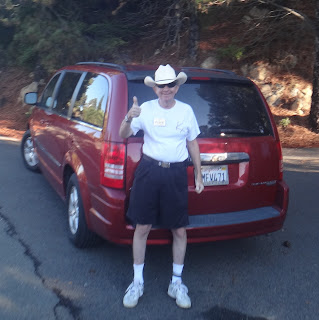 Frank was often seen helping cyclists with mechanical problems while on long bike rides.  Here he is seen on the Knoxville Fall Classic Double Century in September, 2013 and 2014 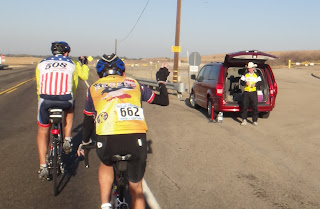 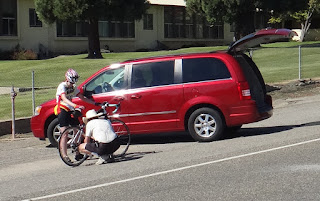 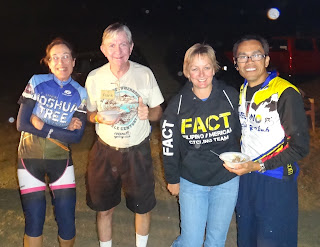 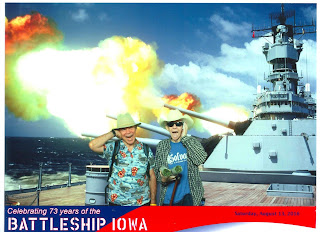 Frank and his buddy, Mark Kaufman, had a blast touring the
Battleship Iowa in August, 2016

Karen Thompson captured this great video of Frank
at the Mines Road Water Stop
on the 2016 Devil Mountain Double at
https://goo.gl/photos/pFWBf7kuMjFpbGQK9