"I saw Dan shortly after his first surgery. On this Sunday about 1:30pm I finished up a ride with a friend. Then started to ride over to the hospital to see Dan, but change my mind because I knew I would be in that area on Monday. Never thought of Dan not being there the next day... WOW! I'm thinking a lot more now!

The first time Dan had me crew for him on the FC 508 was 2007. It was one of my best memories with him. He was racing that year with Joe Brown, and they had Kevin Baer and myself as their crew. The four of us laughed so hard on that event, our guts were sore. Everything was just funny to us, no matter what it was. Cindy Staiger, who was officiating, had stopped us. Dan's hardwired-in auxiliary flashing went out on his van in Panamint Valley, so everyone was frantically trying to trace a short in the dark. About a half hour later a solo racer DNF'd right by us. Cindy borrowed the portable flashing lights from the solo racer, came over holding the lights in her hands and asked us if these would help us. We all laughed and Dan was on his bike racing to Death Valley.

On Townes Pass, Dan wanted me to follow him down the pass. Dan was very particular how he wanted to be followed down the pass. Kevin was driving up the pass, so we decided to switch drivers as the van was moving. Not a wise move, before we could get switched the van is rowing backwards, and Dan lost the van's ahead lights as he continued to climb the pass. Joe was about ready to jump out, but Kevin and I couldn't hold back and we started laughing. In Furnace Creek, Dan asked if he was going too fast up Townes for us... more laughs.

Next, Dan was cycling the gradual climb from Kelso to Amboy, and Wade Baker was closing in on Dan fast. Dan was almost at the summit, but I could see Wade was going to catch him. I asked Kevin to pull up next to Dan. I asked: "Do you want a picture taken as Wade passes you, or do want it taken at Amboy before Wade gets there?" Dan kicked in the afterburners... more laughs. When we got to Amboy, Isabelle Drake was there waiting for Wade. She had the same polk-a-dot 508 Jersey as Dan was wearing. While she was waiting for Wade, I took a picture of Dan and her. They looked like they were on the same team. It later became one of Dan's favorite pictures. Dan and Joe set a new record that race for the two-man relay team 60+ division that race, which still stands today. 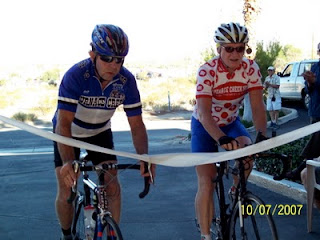 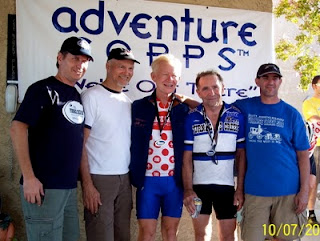 Team Whooping Cranes
Thanks to Jim Cook for this photo
You can see an on-line album of the 2007 FC 508 that I had made Dan and Joe after the race HERE.

One of the most exciting moments of cycling for Dan was in 2009 coming down Townes Pass during the 508. It was about midnight when he reached the summit. He had me take his vest, arm warmers, and water bottle, then handed him two water bottles that he specially prepared for this descent. They were both filled with lead weights from car wheels that he had collected while riding. The conditions for the descent were almost perfect, extra weight, and the confidence having his van's lights right with him all the way down. The curves and especially the dips were very dangerous at speed. Dan would have me follow him on this major descent 3-5 yards back in the middle of the road. On the curves, I would be on the left-side of road and cut the curve before he did, to give him the van's lights through the curve. His daughter witnessed this as she nervously sat in the passenger's seat. Isabelle Drake tried not to watch as she prepared for her shift. I clocked Dan for a sustained speed of 65+ mph for about 2.6 miles down Townes Pass. He passed five racers on that descent as if they were standing still. Dan loved to climb and descend, and he did it fearlessly."

Great story Jim... thank you so much for sharing. nice reminders of days gone by, almost but not, forgotten, totally.