Bruce Berg ... You Will Be Missed 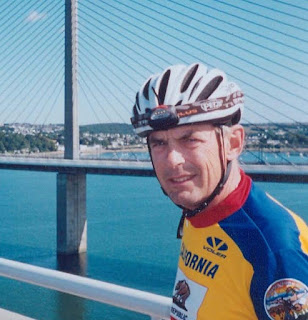 
This is a place where people who loved Bruce Berg may feel free to write a memory they have of him, a story, or to say goodbye to a good friend.  Please share your thoughts by clicking on the "Comments" at the bottom of the tribute below. You need not be a cyclist to share a memory here.  Please send photos of Bruce that we can share to Chuck Bramwell at cbrams@caltriplecrown.com and to Roland Hoffman at roland@hoffmanplastic.com

A memorial service will be held for Bruce:

Bruce started riding seriously while going to college in and he was hooked.  He rediscovered his passion for cycling years later in the late 90’s.

His first Double was in 1999 and he’s grateful that a more experienced double rider (Bonnie Faigles) was along to provide him with batteries for his headlight when his died. 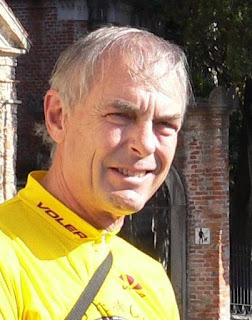 When he was 61 years old, a typical training week for this architect included 50 miles riding both ways to and from work 4 days a week followed by a Century on Saturday and a 20 mile recovery ride on Sunday.

Bruce's favorite Double was the Terrible Two or the .  Both are fabulous events put on by fabulous people and ridden through gorgeous country.  For those from Southern California, he said you ought to see the country in the Spring!

Bruce was a big believer in not having handlebars too far below the saddle.  For most major rides, he’s rode on a Terry Fly saddle.  The wheels he used were Mavic CD Ceramic’s with  triple cross lacing which are fabulous.  He found them to be much, much better for braking, especially in the rain.

He’d like to spend more time talking to or Dan Crain.  He really enjoyed the brief times he was able to ride with Ken Holloway and Dan Crain, both of whom had  enormous amounts of knowledge held in heads with fabulous attitudes. 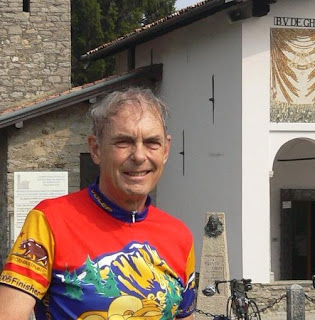 He wrote: “I fairly regularly volunteer on either or .  The Quackcyclists are the BEST!  Best memory was secreting a beer in a cooler in my trunk and giving it to a friend when he came by my rest stop in 100+ degree heat.  That was several years ago and he still sings my praises for that.  Another is using a Hudson Sprayer to cool riders off at the top of Knoxville Grade at the water stop.”

When asked how long distance cycling has influenced his life, he wrote: “My wife loves getting to go to France every four years while I ride in Paris-Brest Paris and she loves waking up to a quiet house on Saturdays.  So I end up with a happier mate.  I’m much, much healthier and thinner since I got into ultra riding.  It’s connected me to a whole bunch of wonderful people.”

He said that without the California Triple Crown, he probably would have only done 1 or 2 of these things and never had gotten so hooked on these longer rides.

He listed as his best long distance cycling experience his Paris-Brest-Paris in 2003.  Hands down.  The beautiful terrain, 4,000 other riders, many speaking English, and the unbelievable support of all of local people along the route in and .  You just have to remember to slow down enough to take advantage of the opportunities. 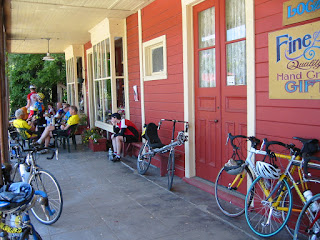 Rob Hawks wrote: "I am so saddened to pass along to you that one of our membership has passed. Bruce Berg, RUSA # 1349, passed away at home on Saturday, December 22, 2018, surrounded by his family.

Bruce was an early rider on San Francisco Randonneur (SFR) rides and a very long time member of SFR.  Bruce rode PBP in 2003 and 2007. If you have ridden the SFR Fort Bragg 600km and enjoyed the staffed control in Anderson Valley, it was Bruce that first began that improvement to that brevet when he and Jack Holmgren took it on themselves to ask the riders before they left SF what they like to have on the road and they went and got those items and then met riders at Dimmick campground. Bruce was my biggest supporter and best counsel when I became RBA. He frequently staffed the Lighthouse control back when our January 200 went to the Point Reyes Lighthouse, and Bruce was the person that set up the way we host the Fleche NorCal when he found Crepes on Cole would work for our needs and he organized the teams riding the event. 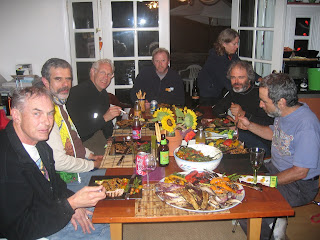 There are many, many other ways that Bruce supported SFR and helped our region grow to what it has become today. I know Bruce personally mentored many new randonneurs. I almost certainly would not be one today if not for his encouragement." 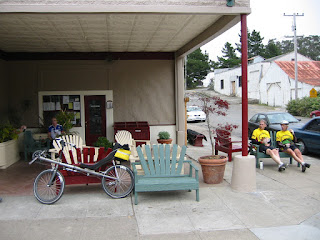 Mark Abrahams wrote: "Bruce was a very active, high-contributing, hearty-riding Grizzly Peak Cyclists member for many years.  He served as President for two years (2002, 2003) and as Vice President twice for a total of over three years (in 2001; again in 2009-2012) as well as in many other volunteer support roles.

He was a frequent and inspiring ride leader -- he led a great many all-day M-pace rides and helped introduce many of us to all sorts of new and beautiful back roads throughout the Bay Area.  He kept those ride groups together in ways that other leaders could not.  People just wanted to ride with him and spend time eating and chatting with him at the regroups.  He was that kind of natural leader.  Bruce was one of the forces in getting GPC to change its club jersey from low-visibility colors to high-vis bright-bright yellow, for increased ride safety.  Since then, many people have complimented our high-vis jerseys without knowing whom to credit.  Bruce's enthusiasm is what drew me into double centuries and drew many others into long distance cycling as well.

Those are just a few among Bruce's many accomplishments and contributions to bicycling.

A personal story: I am the friend mentioned above to whom Bruce handed the unexpected ice-cold beer at Knoxville Double (2003) mid-afternoon when he worked rest stop #4A.  Temps had been over 100 for several hours and my stomach was in full rebellion.  I could not keep anything down, not even the (too-hot) water and energy mix in my uninsulated bottles.

I felt pretty bad, and a bonk plus dehydration was surely near.  Bruce's gift cooled my overheated body core, gave me some much-needed liquid and quick calories, settled my stomach so that I could take in more, and transformed the rest of my ride from pain to pleasure.  The experience taught me how to better care for my body in such conditions.  This story typifies Bruce in a nutshell: he was as dedicated to supporting rides as to riding them; he tended to know exactly what riders needed to keep going and finish; he was there at magic moments when he was needed most; and he had a sly sense of humor." 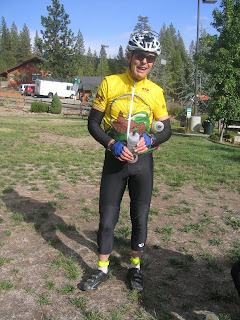 Zach Kaplan wrote: "Very sad news. I knew Bruce was having a bone marrow transplant over the summer but am still shocked. This photo I took of him at the Bass Lake rest top on the 2008 Bass Lake Powerhouse double century is how I remember him, very strong and always smiling.

I have many fond memories of being on rides with Bruce. It seemed like the longer and more difficult the ride was, the more difficult it was to keep up with him. He was a strong rider with a great attitude and almost always had something humorous to say. Also I understand a very accomplished architect." 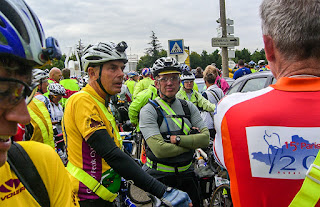 Bruce and other Bay Area riders just before the start of PBP in 2007
Kevin Foley, in the left foreground
Jim Bradbury, to the right of Bruce
Donn King, who's got his back to the camera at right
Photo from Dan Brekke 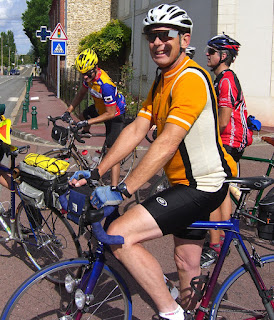 Bruce on a PBP warmup ride to the village of Gambais,
west of Paris, in August 2007
Photo from Dan Brekke 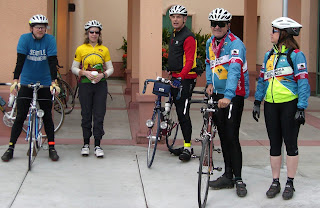 When Bruce was inducted into the California Triple Crown Hall of Fame in 2007, we asked him what his personal philosophy was.  He said, "It’s to enjoy what I’m doing.  The best way to do that is to keep a positive attitude.  Don’t let myself get into a negative headset.  Actually, I find it hard to stay in a negative headset when I’m on my bike."

His tips to a new Long Distance cyclist was to:
1 - Stay within yourself.  Don’t pace yourself off of anyone else.
2 - Eat, drink, and eat and drink some more.
3 - Enjoy what you’re doing.

Although I have only completed two doubles in my life, I have an inkling or can vaguely imagine Bruce's 50+, let alone all of those PBP's and other long rides. He was amazing, and so unbelievably modest Wow!. Not only was Bruce an incredible cyclist, but a gifted and imaginative carpenter and lover of beauty who built his own beautiful home; he knitted sweaters, made pies, How did he do it all? And how did he have so many talents and so little ego about any of it? Most of all, Bruce was an incredible soul. although I have only known him a few years, I really loved Bruce. He was so kind, thoughtful, always open to learn more, and again just so humble. I am glad to have known him. I agree that he will be sorely missed.
Ruth Cohn

I met Bruce on my very first Double Century, the Solvang Double back in 2001. He gave me tips and helped me finish. I would see him on doubles and we would get together for dinner at some of those rides. He also helped me through my first PBP. I have not met a kinder, more supportive cyclist, person or friend. I am better for having known him.

I remember Bruce as an ever present leader on the GPC club rides. Often silent but seemingly ever observant, he spoke choice words that I feel were always in the spirit of having a great cycling experience. I do recall a few clever and fully earned critisms as well that have me presently chuckling inside.
I remember at a rest stop during Sequoia Century we were chatting and I was going on how I would love to do that type of riding with my son. He asked what did we do together and I mentioned how Matthew liked to golf with me. He really cranked up with encouragement of what a wonderful thing that was and he was right and I do cherish it. It was wonderful to have someone with such a huge cycling presence - he was our club president - take an interest and encourage me in another aspect of life.
Other GPC'ers got me to take my first leap into the dream of doing a double. But Bruce was there on the many Saturdays building miles and during the events when I wanted more and became a repeat offender. I fell off of the double merry-go-round years ago but followed news of Bruce and the gang reaching career level accomplishments such as Triple Crown Hall of Fame. Along with his randoneer events, he was truly a big mile monster (or perhaps a km killer).
I have fond memories of many club planning meetings he hosted at his home on McGee where we chowed on Zachary's pizza and downed ales of beer and I thank him and his family for being such welcoming hosts.
It's mid March and I am just hearing this tragic news. I will be on the bike tomorrow in the Berkeley Hills and will be thinking of Bruce and the GPC'ers.